On episode 219 of Running Man, the members, are joined with star-studded guests Joo Sang Wook, Jung Gyu Woon, Wang Ji Hye, Han Sang Jin, and Han Ye Seul. Together, they embark on a Black Knight vs. White Knight battle! Who will reign as the winning team? Warning: Spoilers Ahead.

Kwang Soo, immediately recognizing his close friend, yelled out that Ji Hye was wearing a revealing dress. Hearing him, she raised her arm and made a fist at him. They seem close don’t they? ㅋㅋ

After seeing Han Ye Seul step off the train, Kwang Soo immediately took off the coat he placed on Ji Hye’s shoulders moments ago to put it around Ye Seul’s. Lucky for Kwang Soo that he and Ji Hye are good friends in real life, or else Kwang Soo will be getting an earful from her. ㅋㅋ

3. First mission: Ace and Commander at peace in their place while it’s chaos on the left side.

In the midst of the train art chaos, Ji Hyo and Kim Jong Kook peacefully sat in one cart, watching the others squabble for the last seat. After the game finished, they both were bewildered, and asked everyone else why no one came to fight them, saying how the game wasn’t fun at all. To this, Jae Suk responded that having them in the game was even less fun!

I wonder why no one bothered the power duo…

4. Ji Hyo yelling at Kim Jong Kook in the snack tent and throwing down her snack at the same time

Jong Kook, jokingly pestered her by asking over and over again if she was a black or white knight, to the point where Ji Hyo snapped and threw her snack to the ground! Poor Ji Hyo!

In a dancing frenzy, the remaining Running Man go crazy when they hear the nostalgic dance song “Run to You,” where they, in turn, all got to the ground and twerked.

We couldn’t think what was funnier, Kwang Soo’s exaggerated motions or the fact that they all did it together, actors included.

Down to one of the last two players, Suk Jin, after hearing Ye Seul’s cheer for Sang Jin, asked Ji Hye for a supportive cheer! With this, she showed her 4D personality and yelled for Suk Jin to take care of his health!

Wang Ji Hye really is unpredictable. During her “butt battle” with Jae Suk, she first got hit by his butt, but ultimately won with her rebounding falling force on him.

We guess the Commander even exercises his butt muscles when he goes to the gym! ㅋㅋ

9. When Kwang Soo’s high speed moving hand fails and he gets hit by Sangwoo

-swoosh- wha- did you see that?

Kwang Soo, being his usual creative self, quickly swipes his hand across the table, leaving Jae Suk unable to get a good shot at hitting it. Bemused, Sang Woo waits until the last 5 seconds…where -SMACK- …he directly hit Kwang Soo’s hand. Ouch! I guess Kwang Soo was exerting too much energy in the beginning~

Both the red and blue teams attempted to do their best to make the most complex (and silliest) poses so the other team wouldn’t be able to replicate them! Here are our top choices: 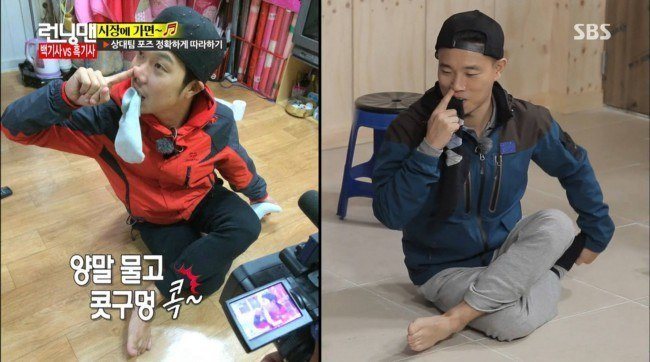 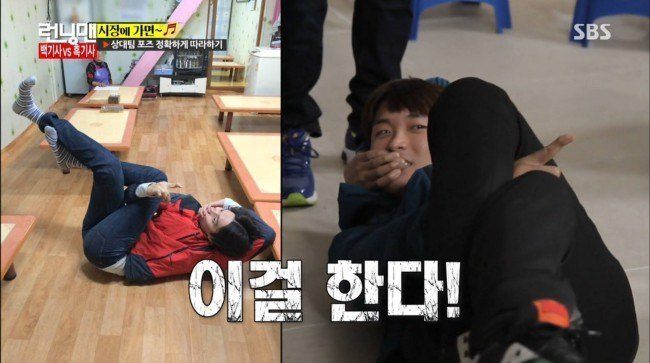 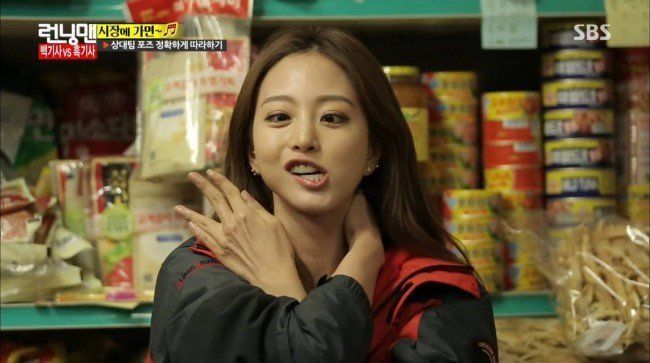 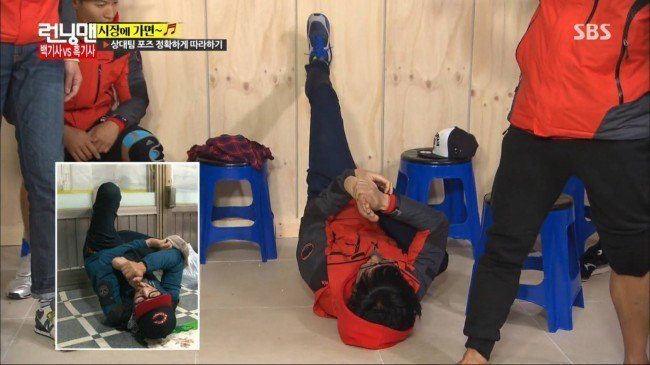 The awesome ajhummas came to the market to make the members of Running Man veggie pancakes. Awed by this gesture, Kwang Soo repays them, by giving them handwarmers to stay warm in the chilly weather. How sweet is he?

What were your favorite moments in this episode? Did we miss any? Were you surprised by the members’ identities?