Jinnabit, the owner of f(x) Sulli‘s largest and only fan page, Sulli94.net, has decided to shut down her fan page resulting in netizens questioning her and supporting her.

Jinnabit is well-known among even non-Sulli fans and was the owner of one of the biggest Sulli fan pages. She was said to be personally close to Sulli and many considered her Sulli’s biggest fan. She has currently closed the fan page and stated her Twitter account will stay up until it becomes expired. Speculations are running wild as to why such a fan would suddenly turn her back on her idol. Netizen comments have mostly sided with Jinnabit, however, there were also hints of differing perspectives.

While some supported her shutting down the page, many f(x) fans were glad to see her leave the fandom as Jinnabit is known for being very extreme with rumors of her threatening and basically bullying any fans who dared to start up their own Sulli fan page. Therefore, she had risen as the top and only Sulli fan page despite the artist’s obvious popularity in K-pop, with the high majority of fan photos of Sulli taken and marked under Sulli94.net, or Jinnabit. 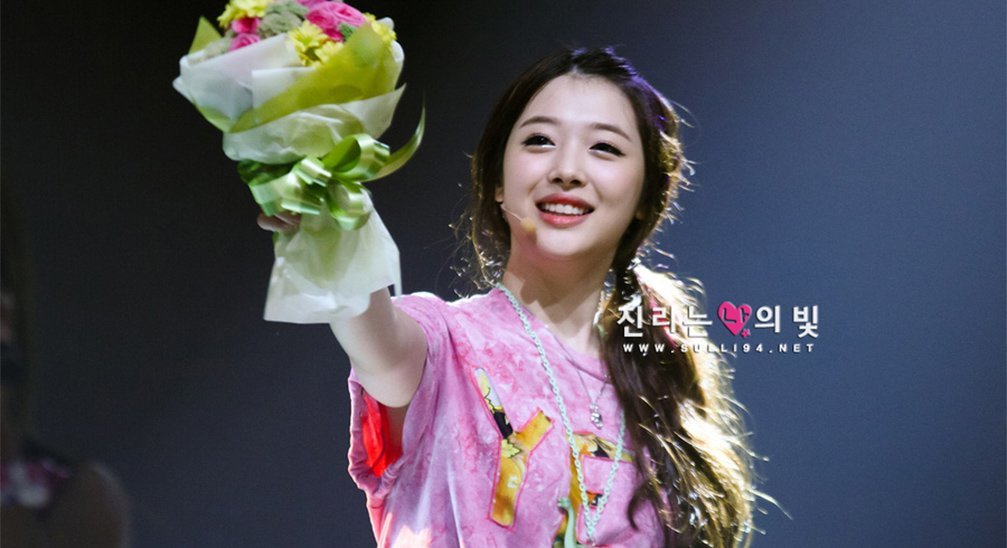 Rumors surrounding Jinnabit continue to say that while acting nicely towards the other f(x) members, she would later say terrible things about later on as in her eyes, Sulli was the best of them all. Word also spread that Jinnabit had been the one who had initially spread the rumor that Luna had a boyfriend as well.

No one can deny that last year was a rough year for f(x), as member Sulli took a hiatus almost immediately after f(x)’s “Red Light” promotions began. With the sudden hiatus of activities, fans were speculating why Sulli chose that path and if she would be returning to the spotlight once again in the future.

Recently, Sulli was spotted attending Amber‘s SBS Inkigayo stage. Prior to that she also made an appearance with fellow f(x) member Luna at the SMTOWN COEX Atrium. 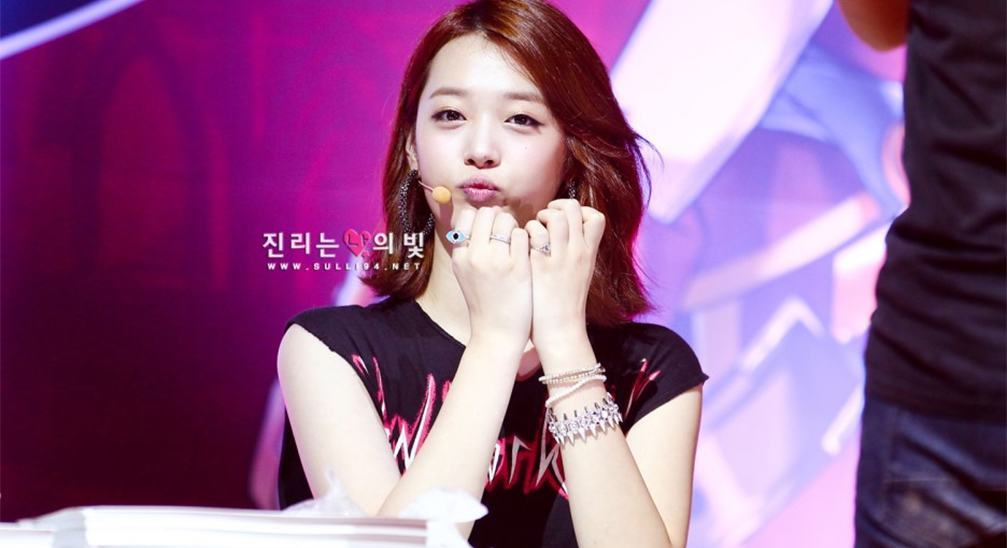 But Sulli’s recent activities have garnered mixed responses. Now, it seems like another controversy has arisen as one of Sulli’s largest fan pages has closed down. This came to light around the same time as a series of potentially controversial tweets from the page’s owner, Jinnabit.

Below are some of the Twitter conversations between Jinnabit and netizens, followed by comments that were left on the original Korean source article on Pann (which has since been deleted), translated by Koreaboo. 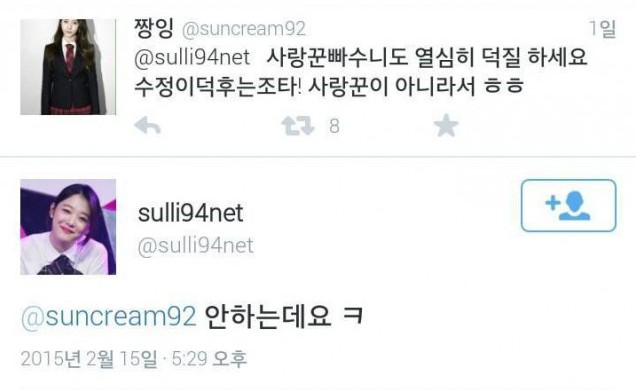 suncream92:@sulli94net happy fangirling to fan of the “lover.” Krystal fans are happy! Because she’s not a “lover” ㅎㅎ 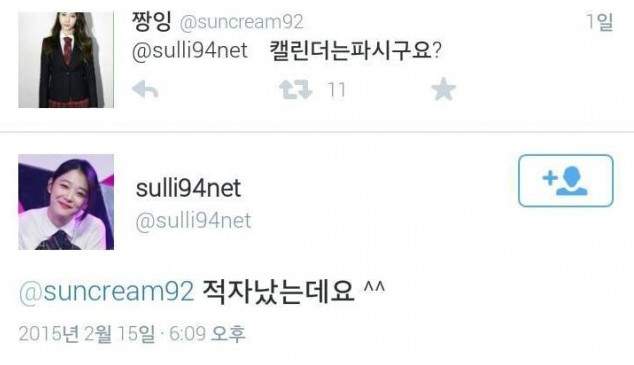 suncream92: @sulli94net but you sell calendars? 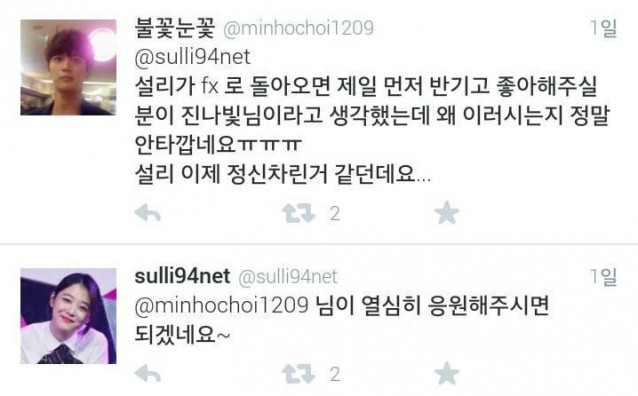 minhochoi1209: @sulli94net I thought you, Jinnabit, would be the first to cheer and be happy when Sulli returned to f(x). Why are you being like this ㅠㅠㅠ It looks like Sulli has her act together now… 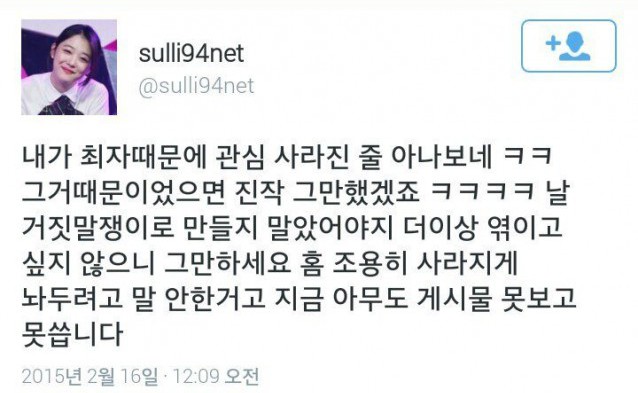 sulli94net: You think I’ve lost interest in Sulli because of Choiza ㅋㅋIf that was the reason I would have stopped all of this a long time ago ㅋㅋㅋㅋ She shouldn’t have made me out to be a liar. I don’t want to be involved any longer so please stop. I didn’t talk about the fan page because I wanted to let it die quietly, no one can read or write on the page anymore. 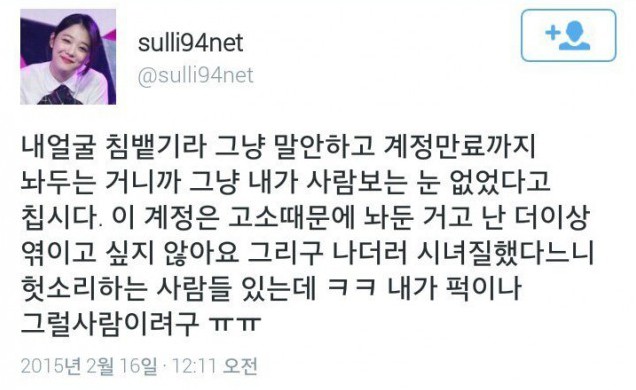 sulli94net: If I talk more about this it would be like spitting on my own face and that’s why I’m just leaving this account to expire. Let’s just say I had a bad eye for people. I’m leaving this account for the legal case and I don’t want to be involved any longer. Some people tell me that I was acting like her maid ㅋㅋㅋ you really think I’m that type of a person ㅠㅠ 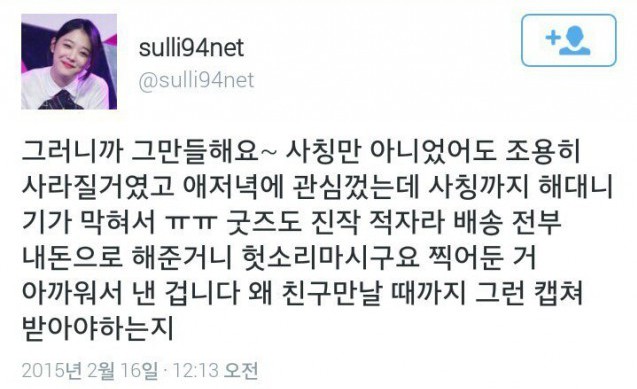 sulli94net: So please everyone stop~if it weren’t for someone pretending to be me I would have disappeared quietly ㅠㅠ The goods, I lost money on it anyway, so I spent my own money distributing because I didn’t want to waste what was already made. The fact that I have to capture proof even when I meet friends sadden me. 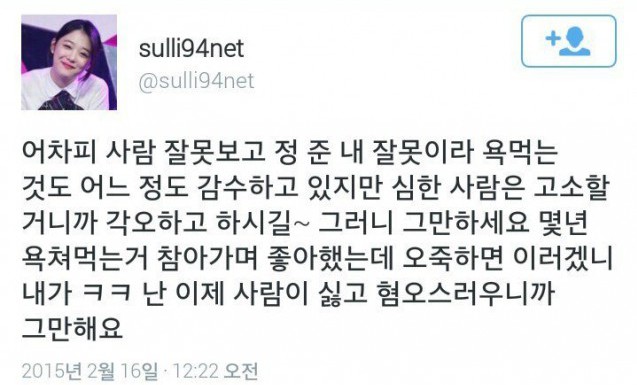 sulli94net: I am at fault for making the wrong judgement on who I took a liking to, so I expect some criticism but I’m going to take legal action if things get out of hand so please keep that in mind~ and do stop. I even liked her through all the harsh words and swearing I received from others. Don’t you think something must have happened for me to act like this ㅋㅋ I detest people now so stop. 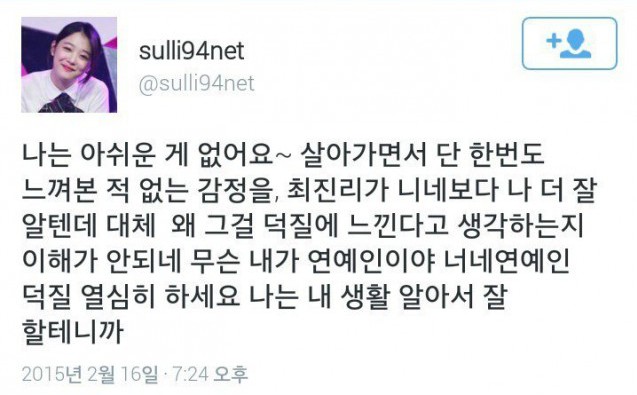 sulli94net:  I have no regrets~I don’t understand why you all think you’ll get that special feeling from obsessing over her when she knows me better than any of you. I’m not a celebrity so you guys obsess over your celebrities and I’ll take care of myself.

sulli94net: @solana_sunny If Choi Jin Ri (Sulli) stays quiet all will be peaceful~ 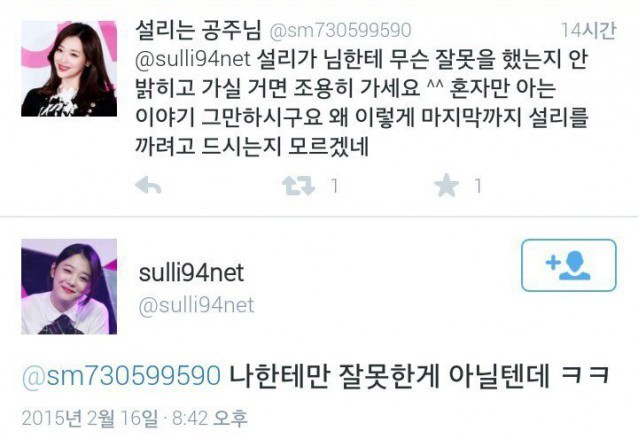 sm730599590: @sulli94net If you’re not going to say what Sulli did wrong to you just leave quietly ^^ Stop talking about things only you know. I don’t know why you’re trying to bring Sulli down even to the end. 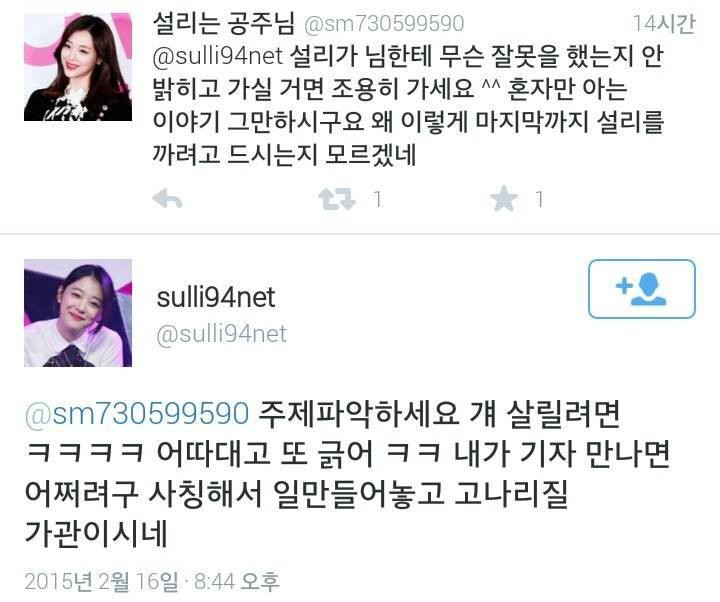 sm730599590: @sulli94net If you’re not going to say what Sulli did wrong to you just leave quietly ^^ Stop talking about things only you know. I don’t know why you’re trying to bring Sulli down even to the end.

sulli94net: @sm730599590 You should recognize where you stand if you really want to help Sulli ㅋㅋㅋㅋ why are you trying provoke me ㅋㅋ what would you do if I went and talked to a reporter. You started this by pretending to be me.

The comments on the original source article on Nate Pann (now deleted) mostly sided with Jinnabit, however, there were a few that expressed differing perspectives. A few comments are pasted and translated below.

1. [+ 258, – 7] I never liked Jinnabit before but I understand what she’s feeling. I don’t want Sulli to be criticized for what she did so I won’t talk in details, but Jinnabit, being 10 years older than Sulli, wasn’t just an unni or a fan but liked Sulli almost as if she was her own child. Ever since she was a little 16 year old kid to now when she is 22.. f(x) fans probably know what I’m talking about. I realized she was more than just a fan when she even found someone to get Sulli her birthdays down the road in case something happens to her. So don’t criticize her too much. She might have done some damage to Sulli but I can guarantee such a loyal fan as Jinnabit will never appear again.

3. [+ 228, – 7] Even if there’s a new fan page for Sulli, I don’t think it will be even close to what Jinnabit had. I checked out the new page and the photos were pretty bad. Sulli you lost a real fan.

5. [+55, -0] A lot of Sulli fans are happy about Jinnabit leaving because she was so extreme but you have to admit that there’s not one Sulli picture out there without her logo on it. 90% of the pictures that non-fans have seen of Sulli are from Jinnabit… She lost a huge fan.