Mino and Taehyun were spotted filming for the V app’s trailer footage. They were seen sitting side by side enjoying some Korean tteokbboki and ice cream. As if they are on a date, they show their new looks with Taehyun wearing a choker necklace and Mino with his new short blonde hair style.

Originally titled “Nam Taehyun’s Choker and Song Mino’s Blonde Hair is Daebaek,” here is the direct translation of the post and comments below:

“Both of their styles are daebak”

“Song Mino’s blonde hair wasn’t too great but after he cut his hair short, it looks so slick”

“After Mino accidentally pokes Taehyun with chopsticks, he asks nicely if he is okay. You have to hear his voice T_T”

“After finding out that it is live and you could check the text messages, they turn their heads to read them”

“So cute turning their heads together T_T”

“After looking at the screen, Song Mino fixes Taehyun’s hair” 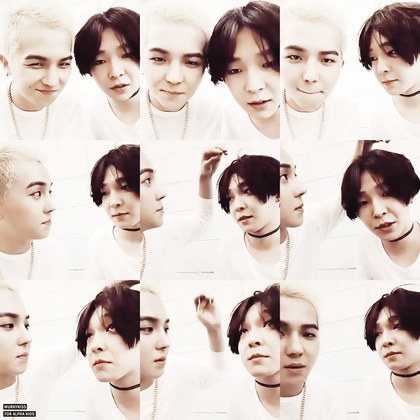 “Because their moods are so different, I think it’ll be really awesome being with them”

“Both of their styles are so daebak T_T”