Netizens discussed girl group fan cafe rankings for July 2015, partly revealing which of the summer comebacks have made the most impact in the industry.

After July’s girl group fan cafe rankings were revealed, netizens gathered to discuss the results. The rankings also revealed how many fans were gained or lost during July as well as the changes in the rankings amongst girl groups.

Originally titled “July’s Girl Group Fan Group Members,” here is the direct translation of the post and discussion below: 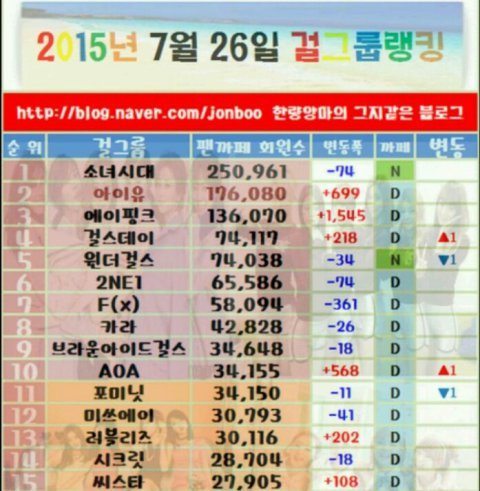 “Despite the fact that Girls’ Generation doesn’t have a official fan group, they have been number one for many years”

“A Pink increased by a lot during their promotion this summer”

[ +92 / -24] Lovelyz is gaining fans even when they don’t promote.. I can’t wait to see how much they will increase once they make their comeback. But Girls’ Generation is crazy despite the fact that they don’t have a official fan cafe.