With Lovelyz‘s Jisoo making her official debut with the group in the group’s new album Lovelyz8, many fans have been wondering about the details about her alleged scandal that prevented her from taking part in the group’s promotions.

With the malicious rumors apparently resolved, fans are still curious as to the exact details of the story. To satisfy this curiosity and to further clarify the situation, however, Korean media The Fact has released a summary of the scandal.

November 9th, 2014
A netizen posted that she had been in a homosexual relationship with Lovelyz’s Jisoo and claimed that Jisoo had sexually harassed her.
November 10th, 2014
Lovelyz’s agency, Woollim Entertainment, tweeted that they filed a request with Mapo Police to investigate the issue at hand and to catch the person who spread the rumor.
March 3rd, 2015
Lovelyz released their album Hi~.
May 8th, 2015
Woollim Entertainment stated that after investigating, the police had fined the netizens responsible for spreading the rumors A (accused) and B (underage) for spreading the false rumors.
June 21st, 2015 to July 21st
Private trial
June 21st, 2015
The accused, also known as “Jisooluv,” received a summary order.
June 23rd, 2015
A formal trial was requested.
June 24th, 2015
A lawyer submitted to have the charges dropped.
July 21st, 2015
This was the trial date. The accused attended the trial.
August 26th, 2015
According to a Twitter user, “Jisooluv” had demanded a formal trial. Records showed that the law firm representing Jisoo had a record of dropping the charges against “Jisooluv.”
September 4th, 2015
Woollim Entertainment released a teaser image featuring Jisoo for Lovelyz’s comeback album Lovelyz8, officially confirming that Jisoo will be officially joining the group.
September 7th, 2015
The Fact received an exclusive interview from a woman known as ‘D.’ She claimed that she was threatened to be outed by Jisoo while they had been dating, and provided voice recordings as evidence.
The recordings: 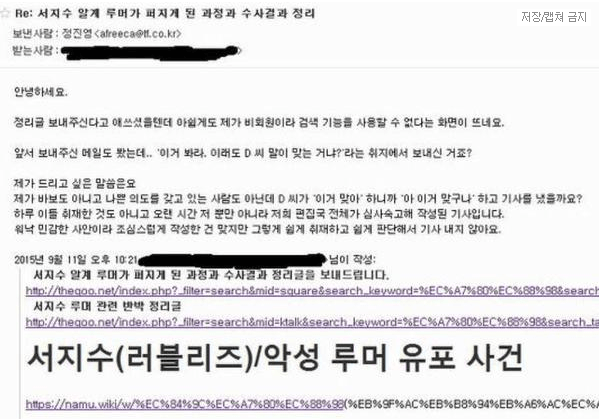 A fan of Lovelyz later posted a response to The Fact’s article and received a reply by The Fact shortly after.

You must have worked hard to send us your rebuttals, but unfortunately, the links say that I cannot read the posts because I am not a member on the site.

I also read the email you had sent me prior to the rebuttal… You were essentially saying, ‘Look at this. You’re still saying that D was right?’

I want to tell you this,

I am not dumb and I don’t harbor any bad intentions. Do you believe that I just wrote the article because ‘D’ said, “This is it?” The article didn’t take us just a couple days, but a very long time. The article was published after careful consideration by our entire editing team. We handled this issue very seriously because it’s a very sensitive news story. We don’t just publish an article after glossing over the issue and issuing judgment right away.”

Source: The Fact and Instiz