Everyone has goals or activities they want to achieve before they die, and Jeon Somi‘s bucket list from 6th grade reveals she had big dreams and plans.

On February 25, Jeon Somi revealed on MBC‘s My Little Television a bucket list she made ever since she was in 6th grade, and it included 20 items. She brought the actual list she made to the studio and showed the viewers the list in her adorable and neat handwriting.

The first thing on the list was that she wished to debut, and having accomplished it already, Jeon Somi applauded herself and expressed her happiness with being able to achieve the first item on the list. 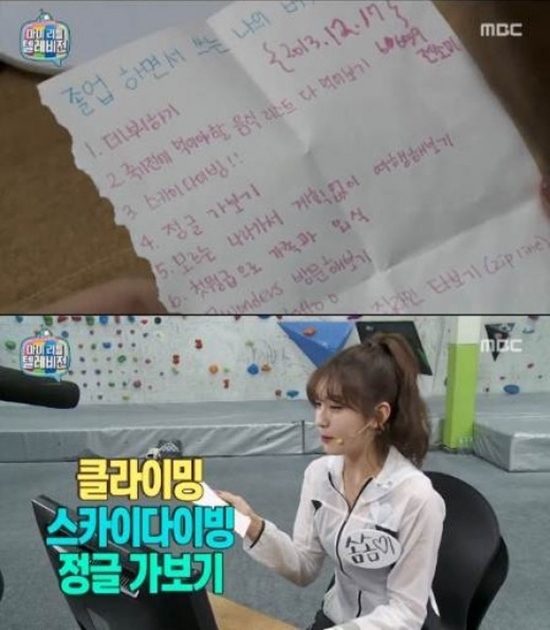 Jeon Somi’s bucket list since 6th grade:
1. Debut
2. Eat everything on my food list before I die
3. Skydiving!!
4. Go to the jungle
5. Travel without plans to a foreign country
6. Go out to eat with family with my first pay
7. Visit the 7 wonders

Other items included activities such as rock climbing, skydiving, exploring the jungle, swimming with turtles, and seeing monkeys.

During the stream, one viewer even commented “I’m a monkey“, and received many laughs and compliments on their humorous comment.

V Can’t Stop Thinking About His Fellow BTS Members And Gives One A Call During “In The SOOP: Friendcation”