Popular Korean web portal Nate recently published a poll and asked netizens one of the hot topics currently being discussed in South Korea: Should females get their own train car?

Posted online on September 17th, the poll has garnered the response of over 24,762 netizens. According to the poll, 60% (14,825) responded that they are “against” female-only cars because it is against gender equality while 38% (9,531) voted “for” it due to the high sex crimes that occur on the subways.’

Another 2% (406) voted “others” and were given the option to leave their reasons in the comments. 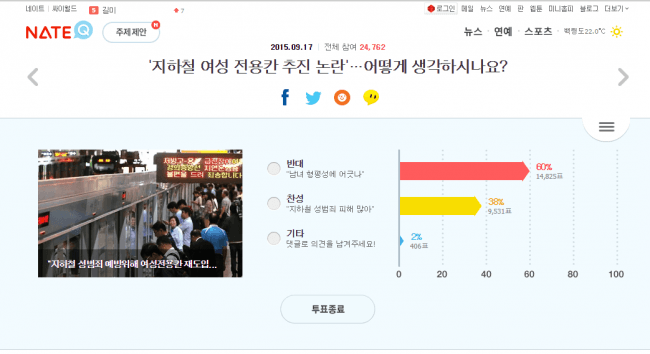 Netizens shared their thoughts in the comments with the most upvoted ones provided below:

[+1,135 / -116] Make men only sections too. I don’t know why men have to suffer being treated like perverts and there are even women who take advantage of such social stigma and try to scam you for money.

[+803 / -105] I’m a girl and wouldn’t it make sense not to do these things but punish sexual offenders more severly? Make them unable to take public transit or hell just cut it off. This only makes women look worse just cut it off it’s easier that way.