Taeyeon‘s solo debut and title track “I” is an immense hit as the song continues to chart at the top on October 10th on all digital charts.

Having released her first solo mini-album I on October 7th at midnight, the song had immediately began to chart and began its all-kill streak just hours afterwards. Twelve hours after its release, the music video was officially published, wow-ing fans with the quality of production.

Since then, Taeyeon has been seen occupying mostly in 1st place on digital chart’s real-time and online chart. As of October 10th at 10:30pm KST, the Girls’ Generation member comes close as ever to a perfect all-kill which is signified by #1s across all real-time and daily digital charts.

Meanwhile, Taeyeon has been busy promoting her album on the music shows beginning with M! Countdown, Music Bank, and Music Core, impressing everyone with her top notch live vocals. 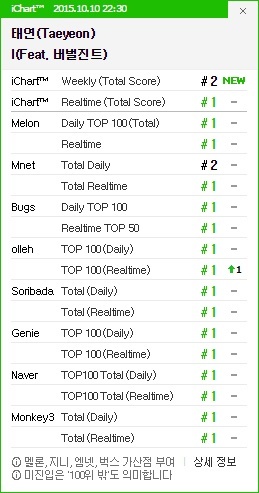