The younger members of BTS love and respect their older members, but they’re not afraid to act like mischievous rascals from time to time.

BTS is a group that often enjoys playing tricks and joking around with one another as if they were family. The main jokesters of the group were always none other than the maknae line, which includes the members: Jimin, V, and Jungkook. As the youngest members, they showed off their youthful energy by teasing the older members and messing around with their playful antics. Although the older members may have seemed annoyed by them sometimes, deep down they probably found their jokes to be cute.

Here are some of the moments where the maknae line was up to some mischief:
In this video, J-Hope was trying to get some rest in between their busy schedules, but the third and second youngest members wouldn’t allow him to sleep so peacefully. Jimin was first to bother J-Hope as he started to poke and go inside J-Hope’s sweater. In defense, J-Hope was able to get rid of Jimin by attempting to bite his arm. Unfortunately for J-Hope, Jimin brought along a friend to help. With V’s help, Jimin started to pull apart the chairs J-Hope was using to support himself. J-Hope used all his strength to stay supported but ended up falling to the floor. In the end, the hyung was able to regain control.

Last year, the youngest members, V and Jungkook uploaded a hilarious video of Rap Monster sleeping on their Twitter. In the video, V and Jungkook took turns making a “Ha/Heu” sound before panning the camera to Rap Monster, who was sleeping with his mouth open and making a sound for him. The video was quickly deleted afterward and fans had a hunch about who made them do so. Luckily fans were able to save this video and enjoy the maknae’s antics.

After the music video for”Dope” was released, many of the members loved to tease Rap Monster on his introduction leading up to the song where he says, “Welcome, first time, with BTS?” Out of all the members, V enjoyed imitating Rap Monster’s part the most and did a parody of it many times.

Here’s a compilation of V and Jungkook’s versions (featuring J-Hope who joined in on the fun):

In response to the video, Jimin uploaded a video of him watching Rap Monster’s video and jokingly saying “That’s right, dude. Don’t make them worry. Don’t make your parents worry, okay? Do it well.” The word “인마/dude” that he used is a slang term that is usually used toward someone of the same age or younger which made the video amusing as Rap Monster is older than Jimin.

Earlier this month, Jimin uploaded a picture of Jungkook’s drawing of Jin on their Twitter. In the drawing, you could tell that Jungkook really wanted to pinpoint Jin’s broad shoulders.

That wasn’t the first time he drew their “Shoulder Hyung” with wide shoulders, as he drew them on Jin’s birthday picture too. 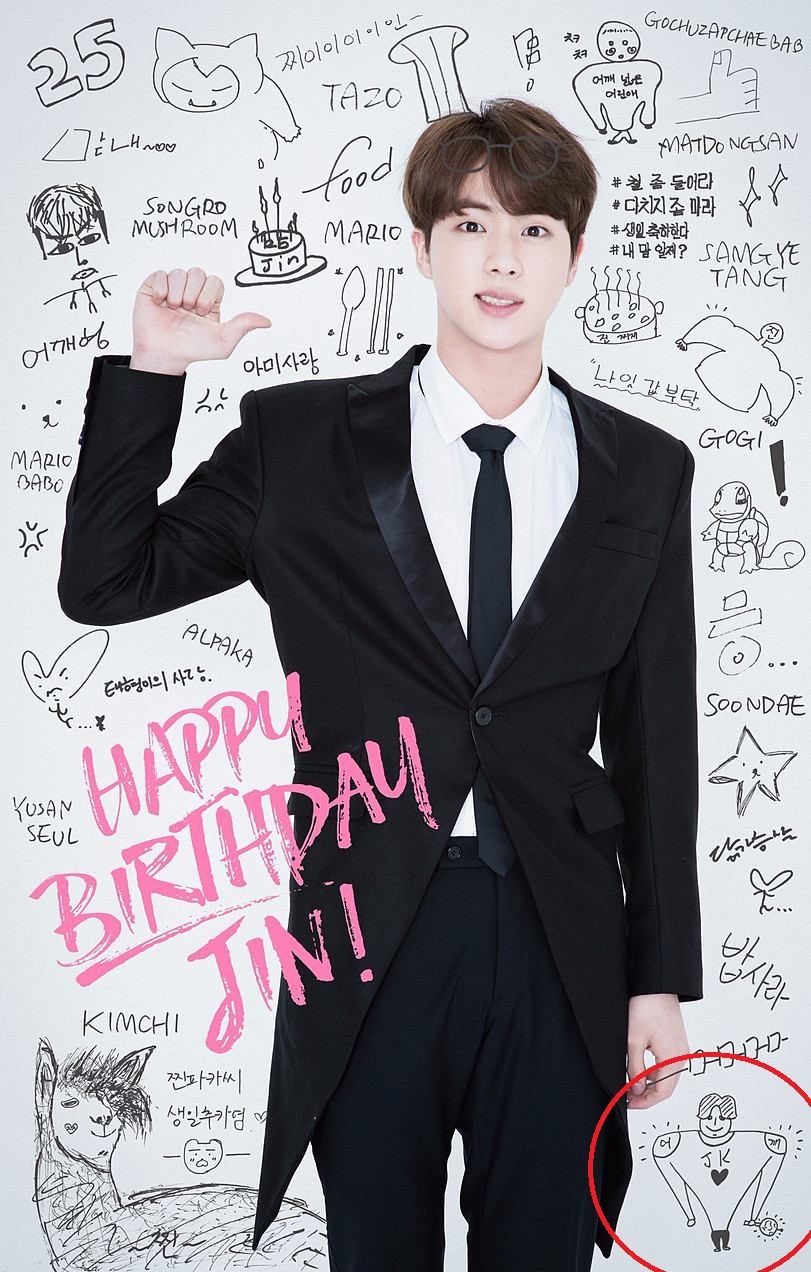 Here’s another one of Jungkook’s drawings of himself, Jimin, Rap Monster, and J-Hope! Fans found it funny how Jungkook always drew his members with similar interesting facial proportions, but always drew himself differently from the others.

If you’re wondering why there aren’t many moments where the maknae line messes with Suga…let’s just say that they’re smart enough not to. Here’s what happened when J-Hope accidentally woke Suga up with his nap when he was trying to mess with V.

Although it’s quite evident that the maknae line is keen on teasing their hyungs, the real maknae is the one that’s on top.

Check out this video of the many times Jungkook was seen bullying his hyungs.