Cameras have captured an unusual habit of Red Velvet‘s Irene when she is performing on stage.

Many consider Irene to be the “top female idol visual” due to her gorgeous looks. Her talent as a singer and actress has captured the hearts of many. Hilariously, even idols from other groups have been caught ogling her outstanding beauty. With her killer good looks and perfect proportions, it’s no wonder that girls want to have a body like hers.

Unfortunately, being a top notch visual has its downsides. The extra unwanted attention that Irene got for a viral GIF proved to be more harmful than good.

An unknown internet user reportedly posted a GIF in a male community that exposed Irene’s undergarments. Since then, Irene has been spotted covering herself during her performances.

Being exposed in such a manner must have been emotionally and psychologically traumatizing for Irene. Because of this, the delicate and sensitive idol went to certain lengths to ensure that it wouldn’t happen again.

Unfortunately, fans have claimed that idols must wear what their stylists give them. In order to portray certain concepts, idols are left with no choice but to wear the outfits that are given to them.

In the GIF below, Irene is the one on the right with the  red shirt. She can be seen covering up as she does a spectacular high kick.

Fans expressed their disappointment and sympathized for Irene. Some have even suggested that idols should be allowed to wear under skirts in order to help protect against incidents like this.

In the past, fans admired Irene’s beauty and especially her confidence in short skirts. As this photo set proves, Irene was once very confident as well as very flattering in short skirts. 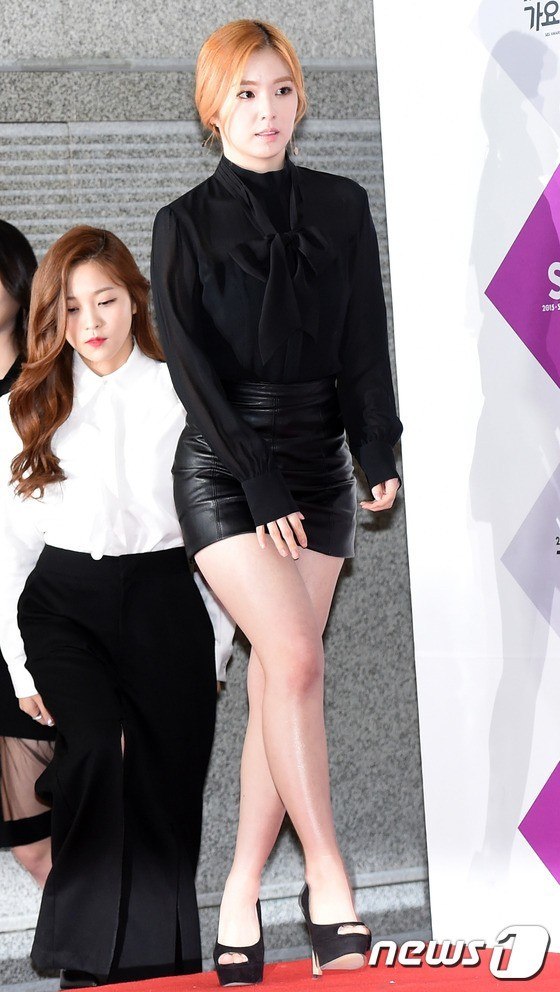 However, this is not the first time that cameras captured Irene looking uncomfortable in short skirts. At the red carpet, Irene was seen covering herself in a very short black skirt.