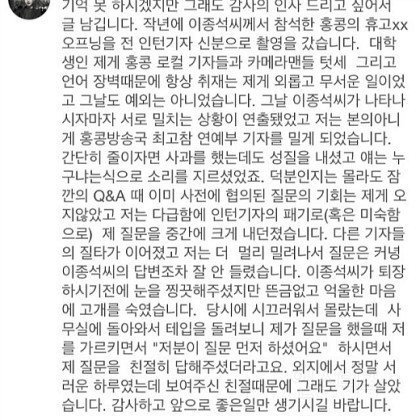 The reporter uploaded a comment on Lee’s official Instagram recollecting a specific event in Hong Kong. She had been an intern reporter for a fashion event that Lee was scheduled to appear at, but was intimidated by the local Hong Kong reporters and cameramen who were not courteous. When Lee appeared at the event, all of the crew began shoving each other and the reporter accidentally pushed one of Hong Kong’s most tenured entertainment reporters.

She was bashed by others even after apologizing multiple times, and was cut off from her previously scheduled interview question. When she got the courage and urgency to blurt out her question in the middle, other reporters bashed her even further and pushed her further away from the stage. She claimed that she couldn’t even hear Lee’s answer to her question, and just sadly looked at the ground despite Lee winking at her in acknowledgement.

However after returning to her office and watching the filmed footage of the interview, she was rejuvenated to see that Lee had pleasantly acknowledged her. He even told the other reporters that “[She] asked her question first” when they tried to overshadow her. The reporter thanked him and said that his support helped her overcome negative sentiments in a foreign country, and wished him all the best.