VIXX’s Leo has closed his social media accounts to the public, after a fanclub owner turned other fans against him.

The controversy started after Leo’s birthday on November 10th. STARLIGHTs claimed that “Close To You” posted a vague photo of Leo with a birthday hat on her personal Instagram account. The photo was posted with the caption, “Together”.

The photo initially had fans wondering if the administrator had a special relationship with Leo. Fans then accused Jellyfish Entertainment of having scheduled an exclusive event with the members of Close To You’s fan site. There was no such mention of this event on VIXX’s official schedule.

STARLIGHT’s claimed that the agency showed preferential treatment to a select group of fans instead of the official fan club. Comments spread quickly from these fans, expressing thoughts of a boycott. Multiple comments were left on Leo’s Instagram and Twitter accounts. This is likely one of the main reasons Leo suddenly made both accounts private.

Here are some of the comments and explanations found throughout the web on this issue: 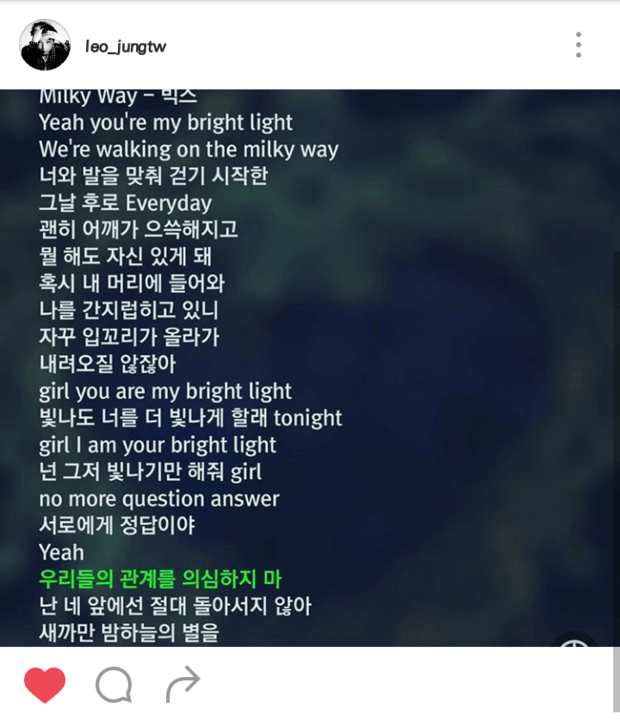 Hello, this is CLOSE TO YOU.
First, I am sorry that my follow-up feedback is late.

It is true that the Instagram photos of the support were taken on the same day, on the support menu there was one birthday cake that was delivered, and the picture was taken during the celebration process.

I have never asked anyone to have a birthday party alone. I was given a brief opportunity during the delivery of the support and it took a very short time.

It was an unwise decision that I posted that photo on my personal Instagram and used the wrong words. I would like to apologize once again, I’m sorry.

Also, let me explain why I can inquire about a support on the afternoon of the 8th and proceed with the support on the 9th. You can only talk about support-related things with the fan manager.

From the fan manager, I received an e-mail saying that according to the musical support order, I was the first one. If there was no musical schedule on his birthday, and I was unable to provide the support, then I would have gotten a reply that the birthday support would have been allowed on a different date.

There is nothing else to say but sorry for doing something wrong. This is completely my fault and my obvious mistake. I sincerely apologize. I’m really sorry.

The incident caused Jellyfish to respond to fans of VIXX through their official fan-cafe. The translation of their full statement can be found below:

Hello, this is Jellyfish Entertainment.

The point of concern, ‘the support team requested a cake, there was a birthday party or celebration prepared for the support team,’ is not true, the [VIXX] member was simply giving his greetings as a show of gratitude to the support team who came to the ‘MonteCristo’ rehearsal location on November 9. Please refrain from exaggerating the circumstances. In the future we will be more careful so that these kinds of misunderstandings do not occur during supports.

From today forth, the fanclub members in question will not be able to participate in public broadcasts, events, or fansigns with VIXX, they will be removed from the fanclub, and have been told they are not allowed to re-join. In the future, we plan to maintain this strong stance with those who continue to try and ‘create misunderstandings and invade privacy.’

Also, to protect the rights and interests of our company’s artists, we will take legal action and take strong action against those who ‘circulate falsehood and spread defamation’ such as malicious rumors, attacks on character, and hateful comments.

Once again, we apologize for worrying Starlight with these misunderstandings caused by this incident.